How to get there: driving down Riviera Berica statale road 247, 9.9 km south of Vicenza. Autostrada A4 VE-MI: coming from Milan, exit at Vicenza Est and immediately turn right into Riviera Berica raod. After crossing the bridge on the Bacchiglione, turn left to Longare. Coming from Venice, exit at Grisignano and drive down statale road 11 to Vicenza. In Vancimuglio turn left to Longare (10.2 km). 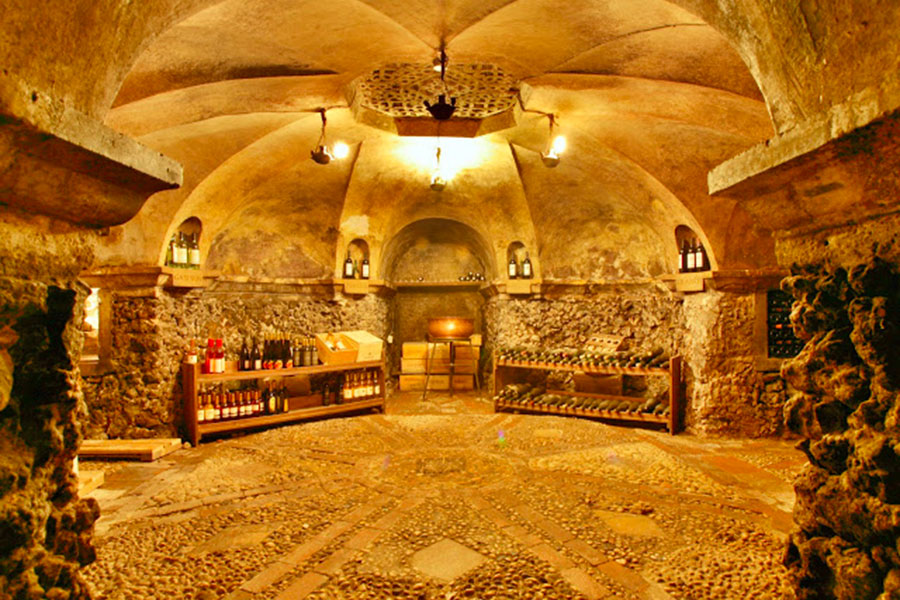 Costozza is renown since Roman times for its stone quarries. These have later been turned into wind-tunnels, that is, an underground system of ventilation by wich fresh air was blown into villas and cellars. 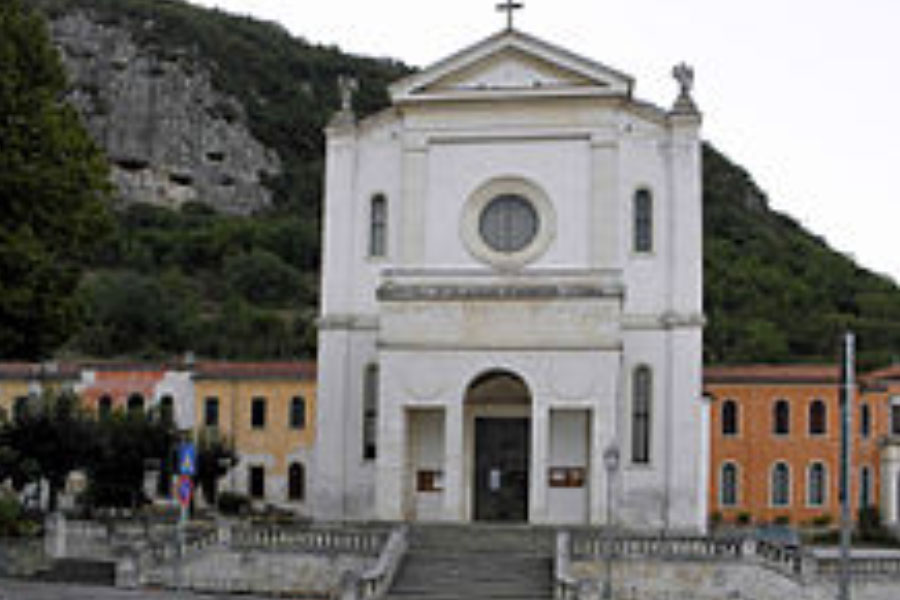 The original 14th-century building was enlarged and modified in the 17th and 18th centuries. Inside, visitors can see remnants of medieval frescoes. 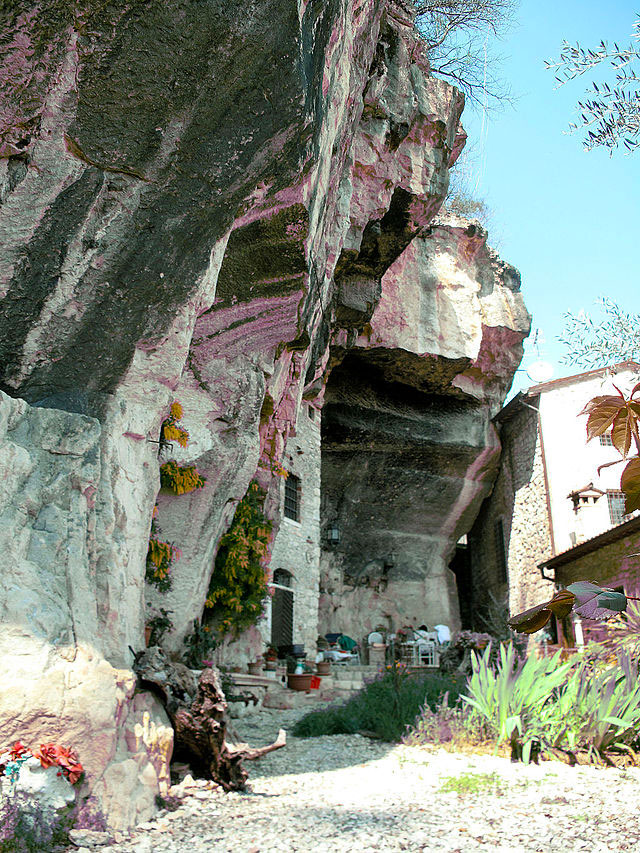 A remarkable exemple of (now-abandoned, of course) cave-house, ie, natural cavities that were modified and used as dwellings up to not-so-distant times. The rooms are decorated with pictoresque bas-reliefs. 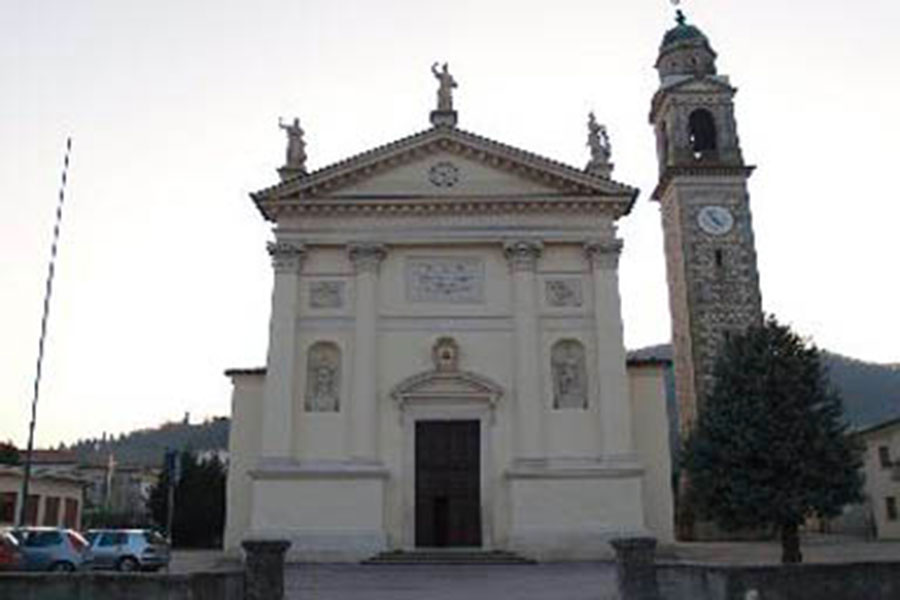 This church, designed by Calderari, was built between 1796 and 1800, on the site of the demolished 14th-century one. Inside, visitors can admire a canvass by Maganza, depicting Mary Magdalene and Christ. On the sides of the main entrance, the statues of mary Magdalene and John the Baptist, from the medieval church. 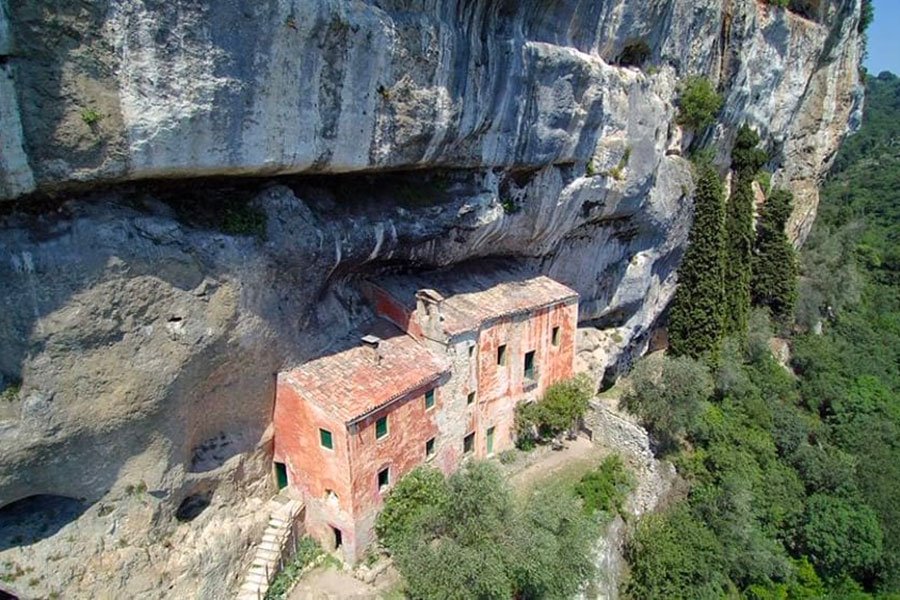 The building visitors can see ejecting from the side of the mountain, a property of Count Alvise Da Schio which is currently taken care of by Club Speleologico Proteo di Vicenza, was built in the 17th century all around the ancient Church of S.Cassiano. Archaeological researches carried out in 1994 revealed that the original church was first built in the 6th-7th century AD, partly inside of a cave. Near this site, thirteen tombs, ten of which are still visible, were carved out of the side of the mountains between the 5th and 9th century AD.
The stone top of only one of the tombs has been found, with inscriptions on it that can't anymore be read. The still-existant church, dedicated to the Holy Sepulchre, which we can reach by climbing a staircase on the northern side of the edifice, was in older days separate from the primitive hermitage and church of S.Cassiano. This religious compound was bought by the Dottori family of Padua in the 17th century, was later bought by a Nicolò Leoni who sold it to the Da Schio family in 1825, who are the current owners. 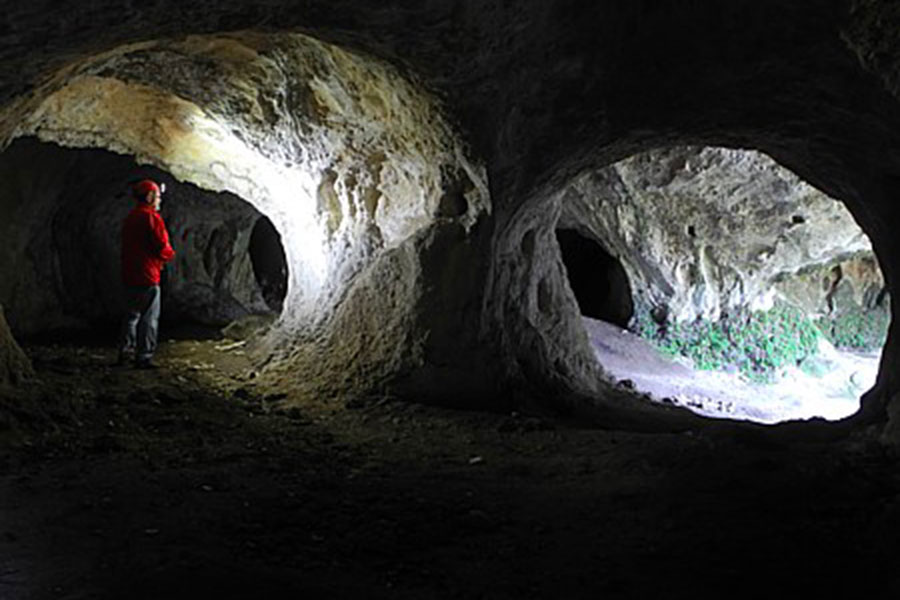 The large entrances of thiese two caves, connected by a man-made tunnel, is at the feet of Mount Castellaro. The finding of late-Neolithic tools in them proves they were inhabited during the Iron Age.

Oratory of the Blessed Virgin of Cramine in Secula.
The shrine, built on a commission of the Valmaranas between 1720 and 1724, houses a statue of the Madonna supposedly by Orazio Marinali. Although this can't be proved, the architect is most likely Muttoni.

Oratory of St Mary of the Snow in Lumignano 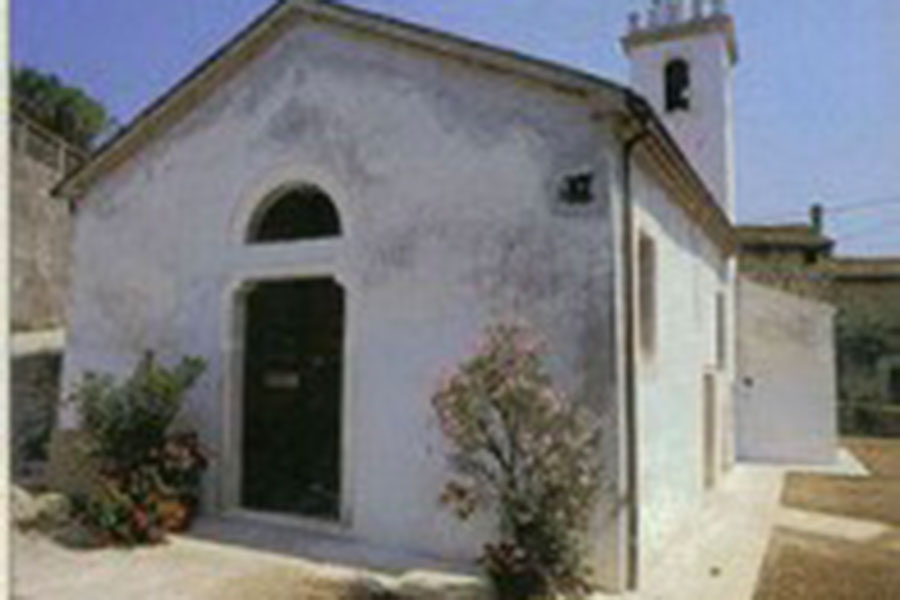 Oratory of St Mary of the Snow in Lumignano

This 14th century building was restored and enlarged in the 17th century by the rich Paduan Dottori family, who at that time owned both this and the S Cassiano shrines.
Inside visitors can see a 15th century wooden statue. The main altar is decorated with a beautiful 16th-century wooden antepedium and a lovely 16th century tabernacle.

Oratory of St. Anthony in Costozza 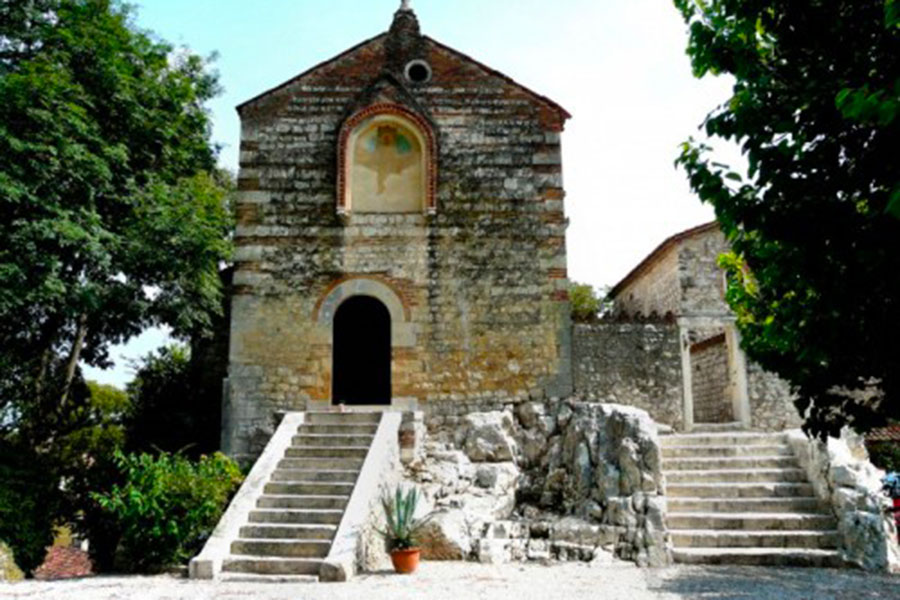 Oratory of St. Anthony in Costozza

Formerly a property of the Friars of St Lawrence of Vicenza, it is now owned by the Da Schio family. Adjoining to it, a private habitation that was once the monastery of St. Anthony. A stone staircase runs from this religiuos compound to the town downhill.
The 18th century shrine has been conserved quite untouched on the outside, while the interior has been widely modified during the centuries.
The canvass behind the only altar, probably a work of Speranza, is now badly damaged. A vey interesting 15th-century fresco in the sacristy and a 1467 stained glass from the Church of S.Giovanni in Monte a Bologna, as well as a 16th-century fresco of St.Valentine and a faithful. 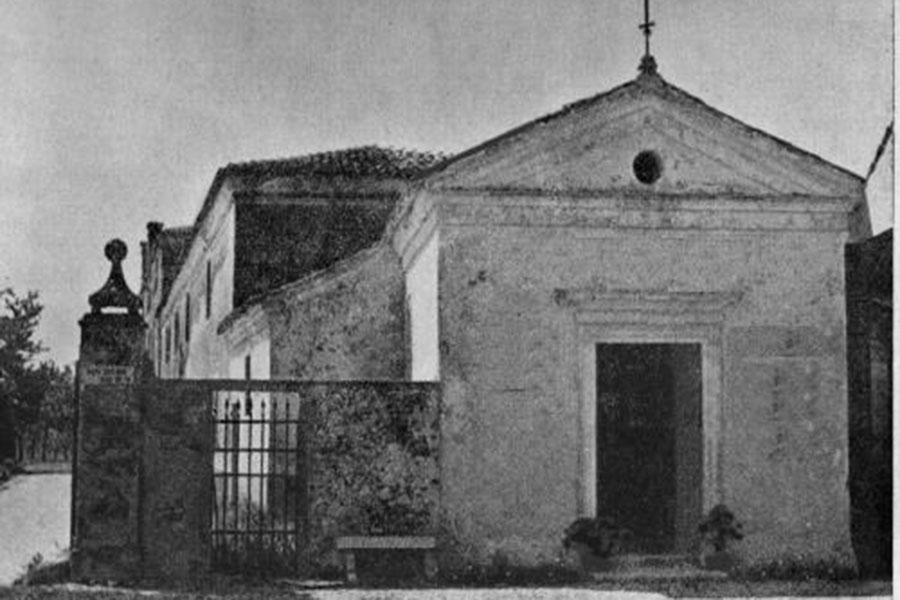 The 17th-century shrine is decorated with stuccos, frescos and stone grates. 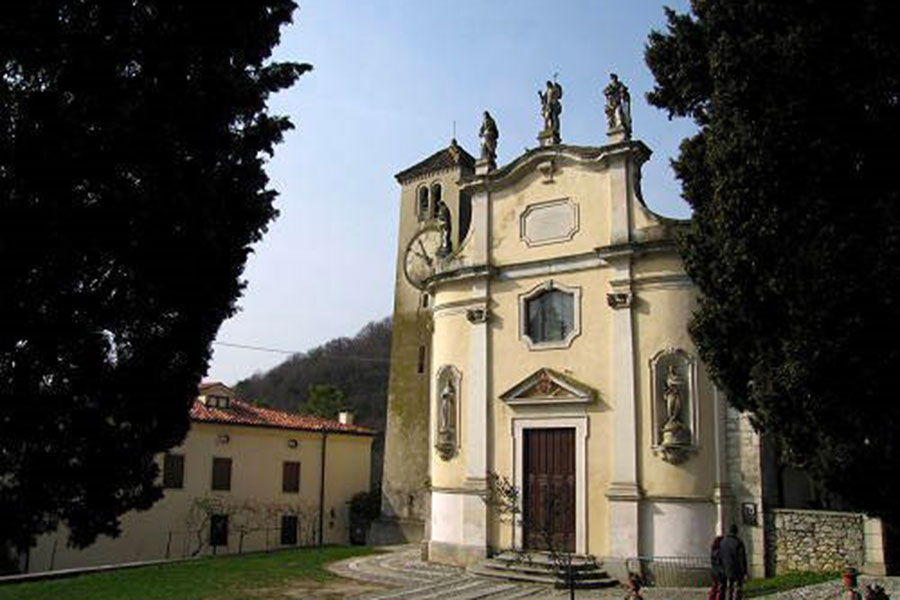 Costozza's ancient parish church was restored in the late 17th century and completed in the second decade of the 18th by architect Francesco Muttoni.
Two beautiful 15th-century ciboria and a 14th-century carved stone at the base of the Romanic belfry is what we can see of the ancient church. Inside, we can see a beautiful canvass of The Glory of San Mauro Abate by Antornio de Pieri, and sculptures by Giovanni Calvi. The Church is open to visits on request by calling 0444.555012.

The 16th-century villa, now a restaurant, was built for Count Francesco Trento. The building basically consists of one large room, under which there's is sort of four-apsed hall filled with fresh air by the wind-tunnel system above described. The above-the-ground room is decorated by beautiful frescos of mythological themes critics once attributed to Zelotti and maganza, but are now believed to be a work of Gian Antonio Fasolo. 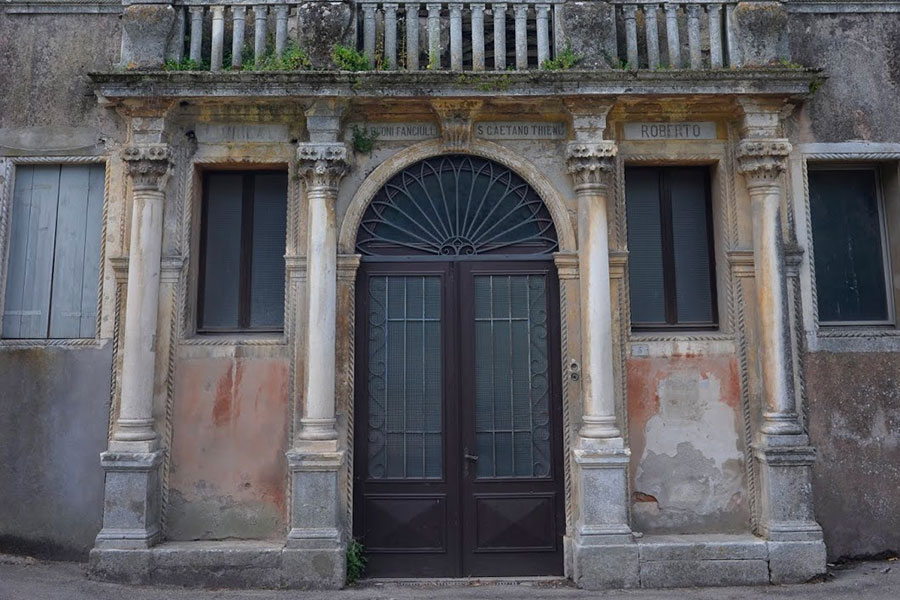 This villa, now the house of the "Mauro Baschirotto Foundation for Rare Diseases", was built in the late 15th century for Giacomo Trento and was variously modified during the following centuries. Two series of frescoes, one of The life of Abraham, the other one of The life of Moses, were painted by Antonio Carneo in 1660-65. A staircase runs from the Villa to the top of the hill behind it. 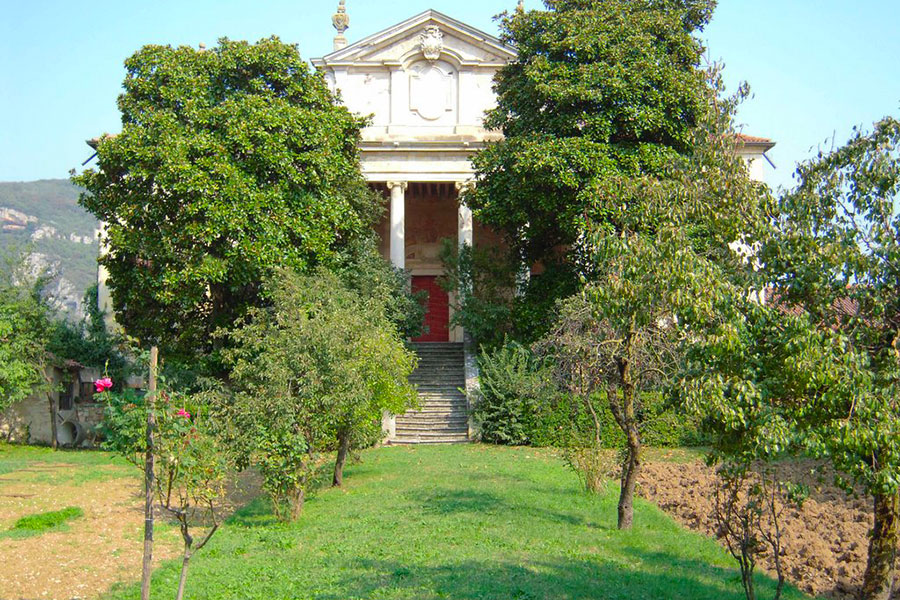 The villa, originally built in the 16th century for Alessandro Dottori, was restored and enlarged in 1726 by Scipione Soncino, as we can read in the inscription in the centre of the tympanum. The 1587 frescoes were painted by Girolamo Moro.
In 1716 the Chapel of St. Theobald was built next to the villa on a commission of the clargyman Annibale Barbo Soncino after the badly damaged church in Lumignano dedicated to the same Saint was demolished.
At a short distance we can see another 15th-century villa of the same family, villa Scaroni Dottori, with a beautiful five-arched porc, while in Ponte di Lumignano there is yet another villa, the imposing villa Dottori Mioni, called the Red Palace. 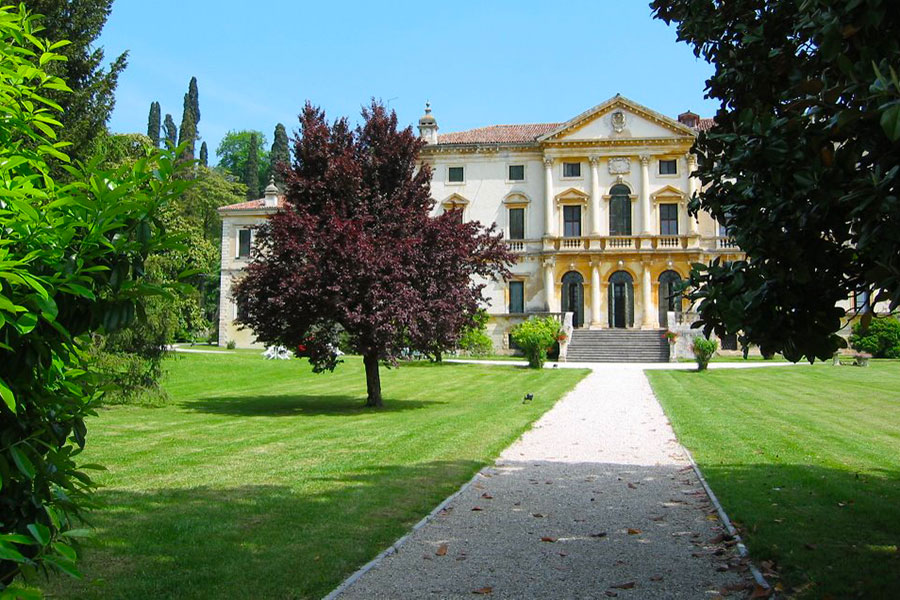 This 17th-century mansion was built for Alessandro Trento on the ruins of an older building by architect Antonio Pizzocaro. The many-layered adjecting facade dominates the beautiful garden. Adjoining to the villa there is a small 15th-century chapel dedicated to St Michael, where a canvas by Carpioni is housed. On the top of the hill behind the villa there is yet anothere building, called La Specola, where Galileo is said to have carried out his astronomical observations while a guest of Count Trento. 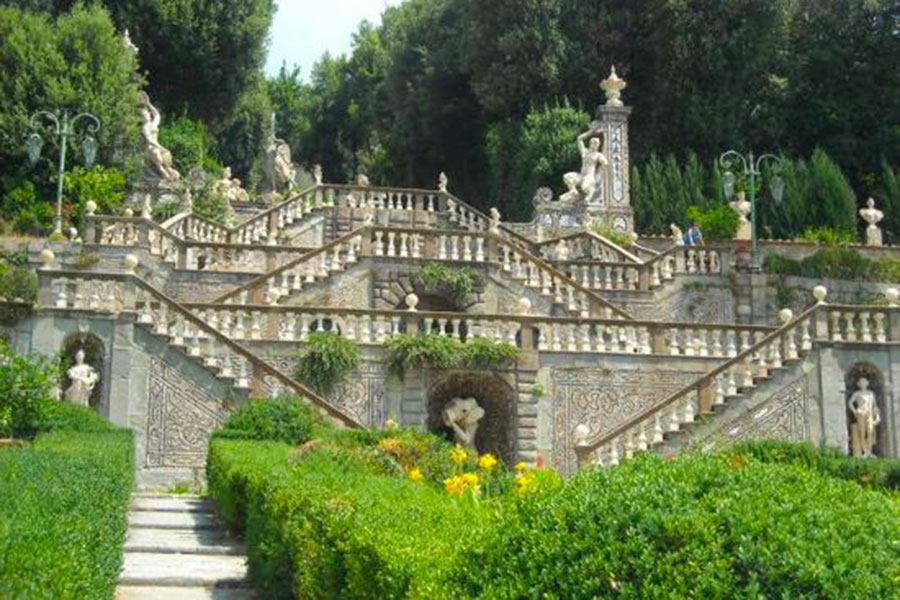 This compound, private property of the Da Schio family, is made up of three villas: at the ground level there are the 18th-century Ca' Molina and the Manor House, that can be reached by a beautiful staircase adorned with statues by Orazio Marinali; on the top level, Villino Garzadori, built for Count Alfonso Garzadori in 1690 on the top of the hill of S. Mauro.
The interiors, partly carved out of the side of the hill, were frescoed by Louis Dorigny.
These three buildings all look onto the large garden, one of the most beautiful in Vicenza, made of different terraces connected by staircases that lead up to the niche with the statue of Neptune, a famous work by Orazio Marinali.

Piazza Giovanni Da Schio, 4 – Costozza
Tel./Fax 0444.555099, cell. 340.4854568
Ref. Giulio Da Schio
E-mail: This email address is being protected from spambots. You need JavaScript enabled to view it.
website: www.costozza-villadaschio.it
Garden: Tue-Sun 10am-6pm. Closed on Mondays. Entrance fee to the garden only: € 3,00. Entrance fee to the garden, Marinali's cave and cellars plus wine tasting for groups of at least 10 people, on request only: € 10,00. Children up to 12: free entrance. No disabled facilities. Flowers market and exhibition on May's third week-end. Car and bus parking area available.